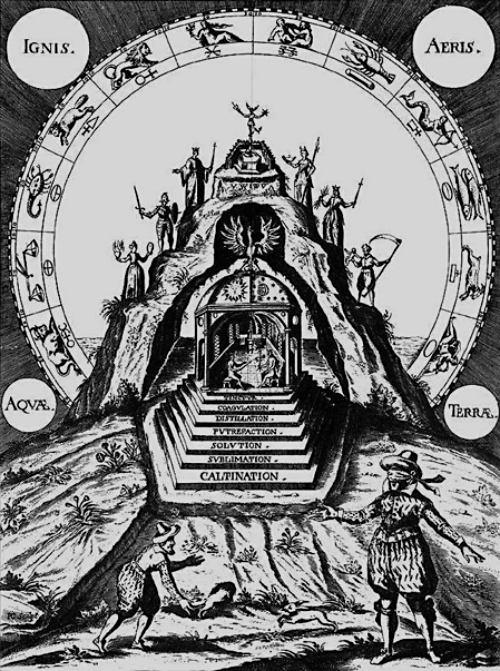 The 7 steps in Alchemical Transformation happened non-linearly and they enable the growth of Consciousness in all directions. They are related to each of the 7 Chakras and Planets as well and are part of an anciently recognized process of permanent Transformation that actually gave birth to modern Science and has been under attack by the Roman Catholic Church for thousands of years.

1) CALCINATION: The process of Calcination is meant to assist in Destroying the Ego’s Attachment to Material things or things outside of the Self. Physically, Calcination is related to exercise and Chemically to Fire, as it burns away at all Material that is undesirable. Psychologically and Spiritually it is the Flames of the Higher Consciousness which will burn away the dross of the restricting habits, beliefs and limitations of the Ego Self.

2) DISSOLUTION: During Dissolution the Conscious Mind is forced to let go of Controlling everything, so Material Ideas are Destroyed within the Psyche and Interior World. This step is associated with the Second Chakra and the Kundalini Experience. During Dissolution you may Experience more profound Dreams, Visions and voices which will appear in order to push the Boundaries of your rational Mind and allow for the Realization of new Material to take place.

3) SEPARATION: Separation is associated with your 3rd or Solar Plexus Chakra. During Separation your Soul comes together with Spirit and for the first time Experiences a Higher perspective that is brought back to your daily Awareness. The new Perspective gave the Soul the discernment for performing the act of Separation and discarding of unwanted Materials. When we discard our unworthy attitudes and beliefs in the step of Separation, more aspects of our own Self are able to be revealed to us. Now that your blocks and misspent Energies have been identified and released, there is more Conscious Energy available to you to further your Transformation and Growth.

4) CONJUNCTION: The 4th Chakra, the Heart Chakra, is associated with the process of Conjunction. During Conjunction, you are performing the marriage of the two sides of Consciousness, the Solar and Lunar, or Male and Female. The stage also represents the merger of Matter and Spirit by joining the three steps below with the three steps above. During Conjunction, it is only the Purest parts of the Self that are recombined for Transformation and a new type of Heart Intelligence is born.

5) FERMENTATION: The 5th Throat Chakra is related to the Process of Fermentation. Fermentation represents the New Life that is born from the Putrefaction of another living organism. The Symbolism suggests a Presence of New Life and along with it new Vitality. This step is important for Solidification of the Soul, and Spirit’s merger becomes permanent and the new Life Force finally overcomes the original Identity with its Higher Presence. The New Spiritual Power and Presence begins to rejuvenate and invigorate the New Life, adding a new level of Insight, Identity and Divine Inspiration to your Perception.

6) DISTILLATION: Just as distilled water is boiled to increase it’s Purity, so is our Psyche agitated and challenged during the Distillation Process in order to ensure that all the Lower Thought forms, habits and contents of our original Ego Mind are completely separated from the fermented Being. At this point, the Kundalini is raised from the Sacral Chakra (1st Chakra) to the Brain and Pineal Gland and it is represented by the 3rd Eye Chakra in the center of the forehead. Techniques such as Introspection and Reflection are used at this stage to Identify those things which do not belong to our New and Reborn Self. Distillation allows us to become Refined and Purified from all Lower functions as the Sublimated Spiritual Presence is released within us.

7) COAGULATION: Coagulation is like the Precipitation of Purified Ferment which arose during the Distillation. The final operation of Coagulation occurs in the 7th or Crown Chakra on the top of your head which effects the Pituitary Gland. It is believed that some sort of Brain Ambrosia is released from the Pineal Gland (phallic shaped gland)and that it combines with the Matter of the Pituitary (vulva shaped gland) to give Birth to your Permanent Body of Light; which is the Immortal Vehicle for your Highest Aspirations and Evolved Aspects of your Mind. The Body of Light retains your Memories and Feelings from your Lifetime on Earth and is able to become one with Soul and Spirit at Death. The Body of Light is similar to the concept of the Astral Body raised and purified through repeated cycles of the entire Process until only the True Essence of the Astral and Mental faculties of the Individual remains. The remaining Being is your Rebirth and that is the part of you which is Immortal and Born from Humanity. This Body of Light is the “Greater or Philosopher’s Stone” of the Alchemists. The achievement of a Permanent state of Coagulation is also referred to as a Return to the Garden of Eden and denotes a Solid Unification with the Divine Mind.